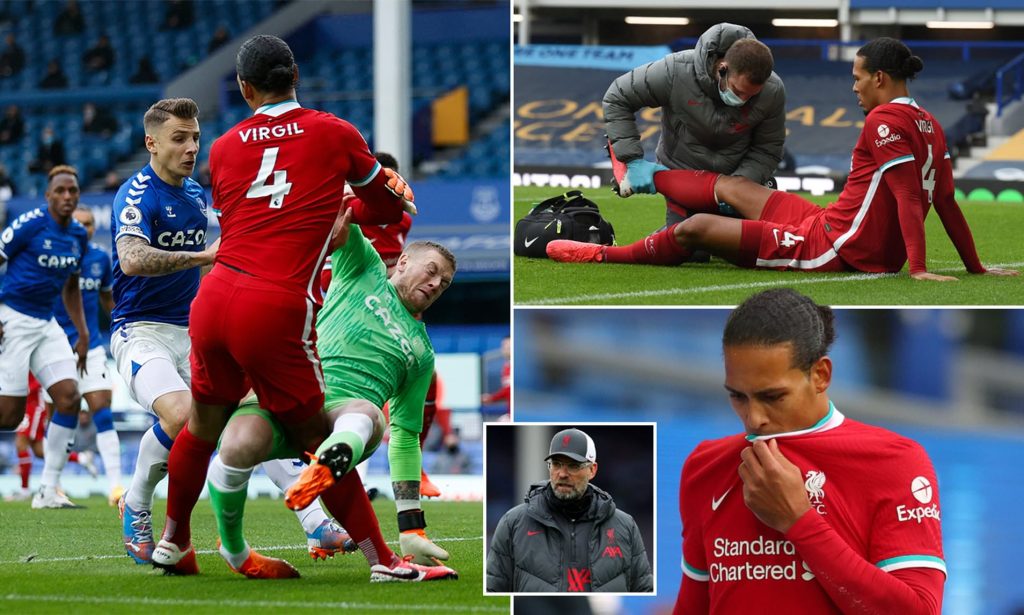 Van Dijk was at the receiving end of a nasty Jordan Pickford tackle during a hard-fought Merseyside derby that ended in a 2-2 stalemate.

The injury to Virgil van Dijk might be worse than initially suspected with reports suggesting the Liverpool defender could be out for the entirety of the current season, with some pundits even expressing fears that he will not be the same player on his return.

Van Dijk was at the receiving end of a nasty Jordan Pickford tackle during a hard-fought Merseyside derby that ended in a 2-2 stalemate.

According to The Athletic’s David Ornstein, the injury could be worse than the ACL that Van Dijk was thought to have suffered from. However, the window of his recovery period could only be estimated after his surgery.

“It’s my understanding – it’s not official – that the damage to Virgil Van Dijk’s right knee is perhaps worse than initially feared and could extend beyond the ACL. It’s unfair to speculate further or give further detail but… it would indicate that we won’t see Van Dijk back on a pitch until next season. He will now undergo surgery. Exactly when, we don’t know,” he said.

“If it was an ACL (anterior cruciate ligament) and without any impact, this injury happens quite a lot, where there is no-one around the player and he twists and all of a sudden he has done his ACL, then that’s fine. You can say he might be back in seven months and might be a similar player.”

According to Sinclair, if the injury was even more severe, it was highly unlikely that Van Dijk would return the same player whenever he did.

“When it’s an impact injury, which this was, you’re talking the ACL, which potentially could have damaged his PCL (posterior cruciate ligament) and…could mean the tibia and the fibia banged together.

“If it is any of them, and not just the ACL, then this could be a lot longer for Virgil Van Dijk to come back I would doubt that we are going to see the same level of Virgil Van Dijk when he comes back.”

According to Ornstein, Liverpool might be looking at making a signing during the January transfer window given the loss of Van Dijk.

“The big question is how Liverpool react, with many eyes already on the January transfer window. As far as I know, that level of conversation is yet to take place internally,” Ornstein said.

“They won’t make a snap call on the matter. They’re not ruling out a January signing but as things stand, I don’t sense it’s likely. January is always a tricky market: prices are high; availability low.

“We don’t know what finances Liverpool would have at their disposal. A player coming in would need time to adapt. They also wouldn’t just have to be at Liverpool’s level, they need to be an improvement on what the club already have.”