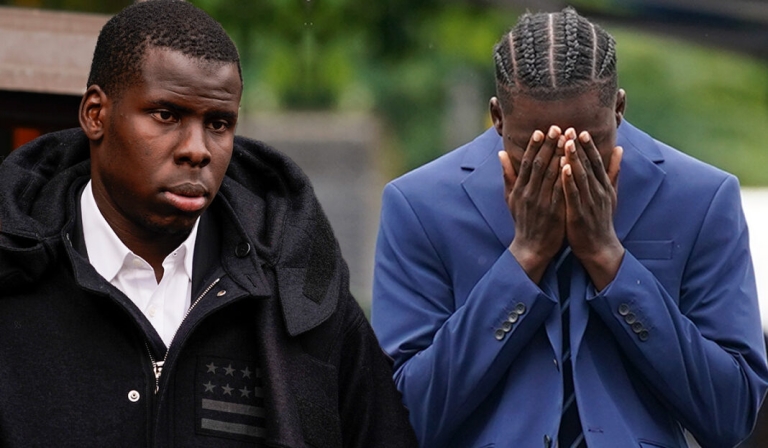 West Ham centre back Kurt Zouma, 27, has been sentenced to 180 hours of community service after he was found guilty and charged for animal abuse after he was filmed kicking his pet cat.

Apart from the 180 hours sentence, the French international was also banned from keeping cats for five years.

He was also instructed to pay nearly £9,000 in court costs by the District Judge Susan Holdham who gave the verdict at the Thames Magistrates Court.

All this comes after a footage of the ex-Chelsea star kicking and slapping his pet cat in his kitchen surfaced and went viral on various social media platforms including Snapchat back in February.

When the incident happened Kurt was in the company of his younger brother Yoan Zouma who filmed the video.

As a result, Yoan has also been found guilty and sentenced to 140 hours after being charged with “aiding, abetting, counselling or procuring Kurt Zouma to commit the offence”.

The court verdict comes after both the Zouma brothers, last week, pleaded guilty to the animal abuse offense, an act which is in contravention of section 4 subsection 1 of the Animal Welfare Act 2006 in the United Kingdom(UK).

Speaking directly to Kurt [Zouma] before she announced the sentence, Judge Holdham who described the incident as ‘disgraceful and reprehensible’ said:

“You kicked and slapped either the same cat or both of them – that cat looked to you to care for its needs. On that date in February, you didn’t provide for its needs but caused unnecessary suffering for your own amusement.”

And following the incident, Kurt who got fined by his club West Ham for his behaviour issued an apology at the time.

He said: “I want to apologise for my actions. There are no excuses for my behaviour, which I sincerely regret.

“I also want to say how deeply sorry I am to anyone who was upset by the video. I would like to assure everyone that our two cats are perfectly fine and healthy.

“They are loved and cherished by our entire family, and this behaviour was an isolated incident that will not happen again.”

Furthermore, Kurt’s brother Yoan who got suspended by his side Dagenham & Redbridge owing to the incident also issued a public apology in February.

“I deeply regret my involvement in the video that has been widely circulated and unreservedly apologise, not only for my actions, but for the upset and distress this will have caused to so many people,” said the France defender.